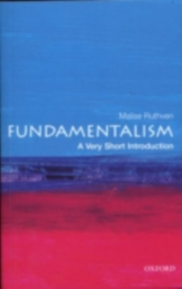 Malise Ruthven tackles the polemic and stereotypes surrounding this complex phenomenon - one that eludes sim today, a conclusion impossible to ignore since the events in New York on September 11 2001. But what does 'fundamentalism' really mean?Since it was coined by American Protestant evangelicals in the 1920s, the use of the term 'fundamentalist' has expanded to include a diver… se range of radical conservatives and ideological purists, not all religious. Fundamentalism could now mean both militant Israeli settlers as well as the Islamist radicals who oppose them, it can mean Christians, Hindus, animal liberationists, and even Buddhist nationalists. Ruthven investigates fundamentalism's historical, social, religious, political, andideological roots, and tackles the polemic and stereotypes surrounding this complex phenomenon - one that eludes simple definition, yet urgently needs to be understood. ABOUT THE SERIES: The Very Short Introductions series from Oxford University Press contains hundreds of titles in almost every subject area. These pocket-sized books are the perfect way to get ahead in a new subject quickly. Our expert authors combine facts, analysis, perspective, new ideas, and enthusiasm to make interesting and challenging topics highly readable.

Other eBooks releases by Malise Ruthven