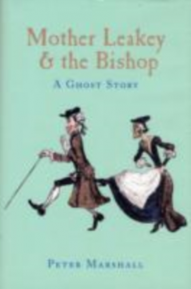 Halloween 1636: sightings of the ghost of an old woman begin to be reported in the small English coastal town of Minehead, and a royal commission is sent to investigate. December 1640: a disgraced Protestant bishop is hanged in the Irish capital, Dublin, after being convicted of an 'unspeakable' crime. In this remarkable piece of historical detective work, Peter Marshall sets out to uncover the … intriguing links between these two seemingly unconnected events. The result is a compelling tale of dark family secrets, of efforts to suppress them, and of the ways in which they finally come to light. It is also the story of a shocking seventeenth-century Church scandal which cast its shadow over religion and politics in Britain and Ireland for the best part of three centuries, drawing in a host of well known and not-so-well-known characters along the way, including Jonathan Swift, Samuel Taylor Coleridge, and Walter Scott. A fascinating story in its own right, Mother Leakey and the Bishop is also a sparkling demonstration of how the telling of stories is central to the way we remember the past, and can become part of the fabric of history itself.

Other eBooks releases by Peter Marshall